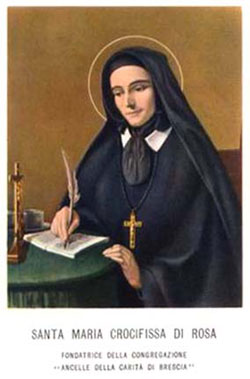 Saint Mary (Paula) Di Rosa December 15 The pounding on the barricaded door of the military hospital sent every heart thudding in terror. In the middle of the war in Brescia (Italy) in 1848, the wounded, sick, and those who cared for them knew what that pounding meant. The shouts from beyond the door came from soldiers, not obeying any command but their inner desire to destroy and plunder. Who could do anything to stop them? The only people here were some Sisters, the Handmaids of Charity, who devoted themselves to helping the sick. The doctors had not even wanted them there. The doctors wanted medical people who were secular and military, not nuns. And in the face of this new danger they were even more useless! Worse than useless — because that Paula (as she was known) di Rosa was actually moving to open the door!

When the door swung wide, the soldiers saw their way blocked with a great crucifix held by Paula di Rosa and two candles held by two of the six sisters who stood by her. Suddenly their frenzy to destroy disappeared, and full of shame before this display of courage and faith, they slunk back into the shadows.

Throughout her life, Paula di Rosa was never afraid to open the door on a new opportunity to serve God, especially when she was unsure of what lay beyond. People who didn’t know her well must have thought she was too frail and delicate for these ventures, but she came armed not only with her faith but boundless energy, intelligence, and hunger to serve.

Born in 1813, she had tackled enormous projects from the time she was seventeen, arranging retreats and special missions for her parish and setting up a women’s guild. Because of all she accomplished, when she was only twenty-four she was asked to be supervisor of a workhouse for poor girls. After two years, she became concerned because there was no place for the girls to go at the end of the day. Night held special dangers for these girls and Paula wanted to give them a safe place to stay. The trustees refused to provide that place. For Paula the choice was easy — she once said that she could never go to bed with a clear conscience if she had missed the chance to do some good. So she quit the workhouse to set up a boardinghouse for poor girls while helping her brother with a school for the deaf.

At 27 she stood before another door. She was appointed superior of the Handmaids of Charity, a religious society whose purpose was to dedicate all their time and attention to the suffering in hospitals. With her friends Gabriela Bornati and Monsignor Pinzoni, she won the respect of those who thought of these “handmaids” as intruders.

Then in 1848, her whole life seemed to fall apart. First she lost Gabriela and then Monsignor Pinzoni died, leaving her without the support and friendship she had come to depend on. War started in Europe and her homeland was invaded. Facing that kind of grief and turmoil, many others would have crawled into bed and pulled the covers over their head. But Paula had always seen opportunity in everything that came her way. War meant that many would be wounded and displaced by the war so she and her sisters went to work at a military hospital and even went out to the battlefield to give spiritual and physical comfort to the wounded and dying.

She died in 1855, going through the final door, unafraid and joyful to be joining her Lord forever.

In Her Footsteps :Mary di Rosa would go out at a moment’s notice if she felt that someone needed her help. The next time someone you know needs your aid, don’t put off helping and make excuses. Drop what you are doing and give them what they need.

Prayer : Saint Mary, you weren’t afraid to take new opportunities. It’s frightening when we are asked to do something that is different or new. We would rather stay in our safe and comfortable routines. Help us to embrace each obstacle in our path as a new opportunity to serve God. Amen