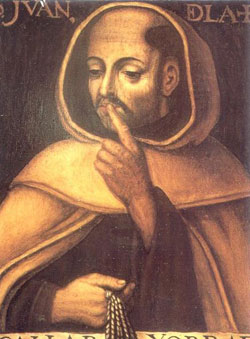 Born in Spain in 1542, John learned the importance of self-sacrificing love from his parents. His father gave up wealth, status, and comfort when he married a weaver’s daughter and was disowned by his noble family. After his father died, his mother kept the destitute family together as they wandered homeless in search of work. These were the examples of sacrifice that John followed with his own great love — God.

When the family finally found work, John still went hungry in the middle of the wealthiest city in Spain. At fourteen, John took a job caring for hospital patients who suffered from incurable diseases and madness. It was out of this poverty and suffering, that John learned to search for beauty and happinessnot in the world, but in God.

After John joined the Carmelite order, Saint Teresa of Avila asked him to help her reform movement. Johnsupported her belief that the order should return to its life of prayer. But many Carmelites felt threatened by this reform, and some members of John’s own order kidnapped him. He was locked in a cell six feet by ten feet and beaten three times a week by the monks. There was only one tiny window high up near the ceiling. Yet in that unbearable dark, cold, and desolation, his love and faith were like fire and light. He had nothing left but God — and God brought John his greatest joys in that tiny cell.

After nine months, John escaped by unscrewing the lock on his door and creeping past the guard. Taking only the mystical poetry he had written in his cell, he climbed out a window using a rope made of stirps of blankets. With no idea where he was, he followed a dog to civilization. He hid from pursuers in a convent infirmary where he read his poetry to the nuns. From then on his life was devoted to sharing and explaining his experience of God’s love.

His life of poverty and persecution could have produced a bitter cynic. Instead it gave birth to a compassionate mystic, who lived by the beliefs that “Who has ever seen people persuaded to love Godby harshness?” and “Where there is no love, put love — and you will find love.”

John left us many books of practical advice on spiritual growth and prayer that are just as relevant today as they were then. These books include:

Dark Night of the Soul

and A Spiritual Canticle of the Soul and the Bridegroom Christ

Since joy comes only from God, John believed that someone who seeks happiness in the world is like “a famished person who opens his mouth to satisfy himself with air.” He taught that only by breaking the rope of our desires could we fly up to God. Above all, he was concerned for those who suffered dryness or depression in their spiritual life and offered encouragement that God loved them and was leading them deeper into faith.

“What more do you want, o soul! And what else do you search for outside, when within yourself you possess your riches, delights, satisfaction and kingdom — your beloved whom you desire and seek? Desire him there, adore him there. Do not go in pursuit of him outside yourself. You will only become distracted and you won’t find him, or enjoy him more than by seeking him within you.” — Saint John of the Cross

John of the Cross believed it was just as dangerous to get attached to spiritual delights as worldly pleasures. Do you expect to get something — a good feeling, a sense of God — from prayer or worship? Do you continue to pray and worship when you feel alone or dry?

Saint John of the Cross, in the darkness of your worst moments, when you were alone and persecuted, you found God. Help me to have faith that God is there especially in the times when God seems absent and far away. Amen