Liturgy of the Hours 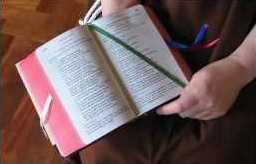 The Church has a full year’s cycle of daily prayer – the Liturgy of the Hours. The custom of reciting prayers at certain hours goes back to a Jewish practice that was continued and developed by Christians in the Church’s early centuries. By the seventh century, this daily prayer became know as the Divine Office. […]

Jesus said to his disciples: “Be watchful! Be alert! You do not know when the time will come. It is like a man traveling abroad. He leaves home and places his servants in charge, each with his own work, and orders the gatekeeper to be on the watch. Watch, therefore; you do not know when […]

Jesus said to his disciples: “Beware that your hearts do not become drowsy from carousing and drunkenness and the anxieties of daily life, and that day catch you by surprise like a trap. For that day will assault everyone who lives on the face of the earth. Be vigilant at all times and pray that […]

Jesus told his disciples a parable. “Consider the fig tree and all the other trees. When their buds burst open, you see for yourselves and know that summer is now near; in the same way, when you see these things happening, know that the Kingdom of God is near. Amen, I say to you, this […]

As Jesus continued his journey to Jerusalem, he traveled through Samaria and Galilee. As he was entering a village, ten persons with leprosy met him. They stood at a distance from him and raised their voices, saying, “Jesus, Master! Have pity on us!” And when he saw them, he said, “Go show yourselves to the […]

Jesus said to the crowd: “They will seize and persecute you, they will hand you over to the synagogues and to prisons, and they will have you led before kings and governors because of my name. It will lead to your giving testimony. Remember, you are not to prepare your defense beforehand, for I myself […]

While some people were speaking about how the temple was adorned with costly stones and votive offerings, Jesus said, “All that you see here– the days will come when there will not be left a stone upon another stone that will not be thrown down.” Then they asked him, “Teacher, when will this happen? And […]

When Jesus looked up he saw some wealthy people putting their offerings into the treasury and he noticed a poor widow putting in two small coins. He said, “I tell you truly, this poor widow put in more than all the rest; for those others have all made offerings from their surplus wealth, but she, […]

Jesus said to his disciples: “When the Son of Man comes in his glory, and all the angels with him, he will sit upon his glorious throne, and all the nations will be assembled before him. And he will separate them one from another, as a shepherd separates the sheep from the goats. He will […]

Some Sadducees, those who deny that there is a resurrection, came forward and put this question to Jesus, saying, “Teacher, Moses wrote for us, If someone’s brother dies leaving a wife but no child, his brother must take the wife and raise up descendants for his brother. Now there were seven brothers; the first married […]