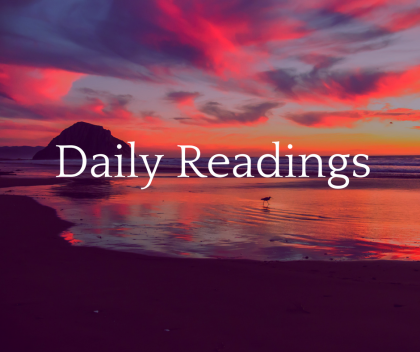 As Jesus drew near Jerusalem, he saw the city and wept over it, saying, “If this day you only knew what makes for peace– but now it is hidden from your eyes. For the days are coming upon you when your enemies will raise a palisade against you; they will encircle you and hem you […]

While people were listening to Jesus speak, he proceeded to tell a parable because he was near Jerusalem and they thought that the Kingdom of God would appear there immediately. So he said, “A nobleman went off to a distant country to obtain the kingship for himself and then to return. He called ten of […]

At that time Jesus came to Jericho and intended to pass through the town. Now a man there named Zacchaeus, who was a chief tax collector and also a wealthy man, was seeking to see who Jesus was; but he could not see him because of the crowd, for he was short in stature. So […]

As Jesus approached Jericho a blind man was sitting by the roadside begging, and hearing a crowd going by, he inquired what was happening. They told him, “Jesus of Nazareth is passing by.” He shouted, “Jesus, Son of David, have pity on me!” The people walking in front rebuked him, telling him to be silent, […]

While some people were speaking about how the temple was adorned with costly stones and votive offerings, Jesus said, “All that you see here– the days will come when there will not be left a stone upon another stone that will not be thrown down.” Then they asked him, “Teacher, when will this happen? And […]

Jesus told his disciples a parable about the necessity for them to pray always without becoming weary. He said, “There was a judge in a certain town who neither feared God nor respected any human being. And a widow in that town used to come to him and say, ‘Render a just decision for me […]

Jesus said to his disciples: “As it was in the days of Noah, so it will be in the days of the Son of Man; they were eating and drinking, marrying and giving in marriage up to the day that Noah entered the ark, and the flood came and destroyed them all. Similarly, as it […]

Since the Passover of the Jews was near, Jesus went up to Jerusalem. He found in the temple area those who sold oxen, sheep, and doves, as well as the money-changers seated there. He made a whip out of cords and drove them all out of the temple area, with the sheep and oxen, and […]